Qualified Charitable Distributions as Part of a Blended Gift Proposal

Blending planned gifts with outright gifts is an essential part of turning the gift discussion to assets. The Qualified Charitable Distribution (QCD), known to many fundraisers as the charitable IRA rollover, is not a planned gift vehicle per se. Nonetheless, thoughtful gift planning using the QCD can put a valuable asset on the table that may not have been considered by a donor making current gift.

The traditional Individual Retirement Account (IRA) is often funded from savings accumulated in employer-sponsored retirement plans upon the owner’s retirement. At retirement, the plan owner moves the funds from the employer sponsored plan into a self-directed IRA. Remember, the plan owner did not pay income taxes on money contributed to their employer’s retirement accounts, such as a 401(k) or 403(b). Likewise, the employee did not pay tax on income earned in their account or pay capital gain tax on the sale of capital assets in the account.

Because the assets in these accounts have never been taxed, when money is withdrawn from an IRA, it is taxed at the donor’s individual income tax rate. That income tax rate is the highest rate of tax on individuals. For that reason, donors avoid using their IRA to make charitable gifts because of the tax burden at withdrawal. Although a donor will receive an income tax charitable deduction for the gift, her ability to use the deduction may be limited by her adjusted gross income (AGI). Also, the withdrawal will increase her AGI, which could have cascading negative effects, such as increased Social Security and Medicare taxes and increased Medicare premiums.

Withdrawals from a traditional IRA and most tax-deferred retirement accounts prior to age 59 ½ are subject to a 10% penalty tax. There is no obligation to take IRA withdrawals until the plan owner reaches 70 ½. After that age, the IRS requires plan owners to withdraw a certain amount of money from these retirement accounts each year. That amount is called a required minimum distribution, or RMD. Each year’s RMD is calculated by dividing the IRA account balance as of December 31 of the previous year by the plan owner’s life expectancy. Therefore, the RMD as a percentage of the IRA account balance increases each year as the plan owner ages.

Wealthy donors may not want or need their RMD because it increases their tax burden and other negative consequences. The qualified charitable distribution lets a donor make a tax-free gift from their IRA during their life and satisfy their RMD at the same time. The QCD presents a unique opportunity to tap into this valuable asset that donors may have never considered when making lifetime gifts to charity.

Here are the QCD basic rules:

Using QCDs in a Blended Gift

While anyone can make a gift of a QCD to charity, those of modest means may need the income from their IRA to maintain their lifestyle. Wealthy donors have often contributed the maximum permissible amount to tax-advantaged retirement accounts for many years. Once they reach age 70 ½, the large RMDs these donors must take may force them to withdraw more income than they need to maintain their lifestyle and may generate unwanted taxes.

Therein lies the opportunity with the QCD. A single donor, or a married couple who both have large IRA balances, may be interested in satisfying part of a major gift commitment using, at least in part, a QCD. A five-year pledge paid with a QCD at the maximum permissible amount would provide $500,000 from a single donor and in the right situation, a $1,000,000 gift from a married couple.

Blending the QCD With Other Gifts

As a person’s wealth increases, the amount of assets in the form of cash and even liquid publicly traded securities decreases. The table below shows that those in the middle 60% of wealth have a remarkable 63% of their assets in their principal residence. The wealthiest 1%, in contrast, have only 9% of their wealth in their personal residence. The wealth of the top 1% is overwhelmingly in private business equity and real estate. 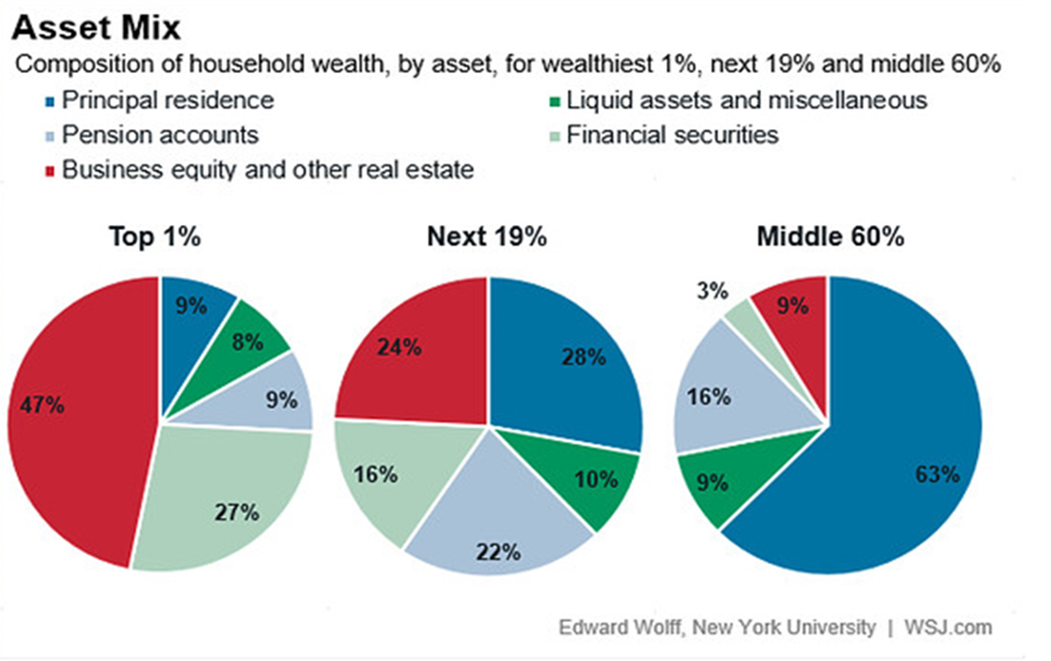 The sale of private business equity, real estate, and even securities generates a significant amount of tax to the owner, primarily in the form of capital gain tax. Gifts of these appreciated assets to charity completely avoids all capital gain on the assets.

Gifts of appreciated assets to charity carry a double tax benefit. These gifts avoid all capital gain tax that would otherwise be due. If the donor has owned the asset for more than a year, the gift is also deductible at its fair market value. The combined tax savings from capital gain tax avoidance and the income tax charitable deduction can reduce the cost of a gift by as much as 58% assuming the highest income and capital gains tax rates apply.

What is the tax savings from the combination of a gift of a QCD and a gift of appreciated property?

Let’s add up the savings and compare the two options:

By combining the QCD distributions with a gift of appreciated property, Pete and Jane reduce the cost of their gift to $1,045,800. Compared to the $1,260,000 after-tax cost of a $2 million cash gift, the QCD/appreciated property gift costs them $214,200 less.

The Qualified Charitable Distribution from IRAs is one of the fastest growing sources of charitable gifts. Every fundraiser should be conversant with the rules and procedures for making one of these important gifts. Gifts of long-term appreciated property continues to be a powerful tax-efficient form of charitable giving. Gifts of appreciated assets offer the double tax benefit of complete capital gain tax avoidance and, if owned by the donor for more than one year, a fair market value income tax charitable deduction.

When combined, the QCD and an appreciated property gift can dramatically increase tax savings and reduce the out-of-pocket cost of charitable gifts. Consider suggesting a QCD in every gift solicitation when the donor is of an appropriate age. The QCD is the lowest cost and easiest asset to consider when blending outright giving with planned gifts.